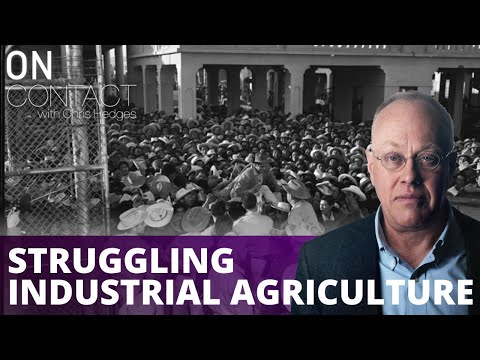 On the show, Chris Hedges discusses the struggle against industrial agriculture with author Daniel J. O’Connell.

The San Joaquin Valley in California is the most agriculturally productive farmland in the United States, but it is also plagued by high levels of poverty and water pollution as well as the serious health risks that come with constant exposure to pesticides. These huge corporate farms in California, established over the last century, became the model for modern agrobusiness designed to exploit a transient labor force, bankrupt, and seize small family farms, exhaust the soil, and drain the aquifers and reservoirs. These agrobusiness use their economic might to buy elected officials, deform the court system to legalize their assault on the land and silence criticism in academia and the press. They are largely unregulated and unaccountable. The disastrous consequences for family farms and farmworkers, plagued by extreme poverty, a retreat into often lethal addictions to blunt the pain of dislocation and suicides, however, is only part of the destruction wrought by these industrial farms. These agrobusinesses have, as the authors Daniel J. O’Connell and Scott J. Peters argue in their book In the Struggle: Scholars and the Fight Against Industrial Agribusiness in California, eroded the bedrock of democracy itself. The authors look at the fight by eight scholars who foresaw and fought the agribusinesses, most of whom were attacked, censored, and marginalized for their critiques.

Daniel J. O’Connell and Scott J. Peters’ new book is In the Struggle: Scholars and the Fight Against Industrial Agribusiness in California.

Check out our other shows!

NO show does it like this. It’s TIME for The News on RT America: https://bit.ly/NRSSHOW

It’s her take on all things political and she presents ALL the angles: News.Views.Hughes with Scottie Nell Hughes, NVH: https://bit.ly/NVHSHOW

What’s your NEWS IQ? Give us 30 minutes, and we’ll take you across the globe! In Question with Manila Chan, IQ: https://bit.ly/IQ_SHOW

Steve Malzberg sinks his teeth into the slander, hypocrisy, bias and lies of MSM. MMM…Delicious! Eat The Press: http://bit.ly/EatThePress

Candid conversations with the most outspoken guy in Hollywood! Dennis Miller + One!
Dennis Miller Plus One: http://bit.ly/DennisMillerPlusOne

Let our TV time-machine bring you the week’s highlights and a closer look at the BIGGEST stories, Just Press Play: http://bit.ly/JustPressPlayShow

Author and social critic Chris Hedges conducts fascinating in-depth interviews with the fiercest critics of the establishment. Watch all episodes at https://bit.ly/2QIkQZg

Yep, it’s Gov. Jesse Ventura and you’re living in his WORLD! Come along for the ride.
The World According To Jesse: http://bit.ly/WATJSHOW

They’re watching you. Are you watching them? Are you WATCHING THE HAWKS?
Watching The Hawks: http://bit.ly/WTHSHOW

Follow the twists and turns of the global economy with Boom Bust, the one business show you can’t afford to miss. Boom Bust: http://bit.ly/BoomBustShow

Do you keep missing the forest for the trees? Let Holland Cooke show you the Big Picture, The Big Picture: http://bit.ly/TheBigPictureShow