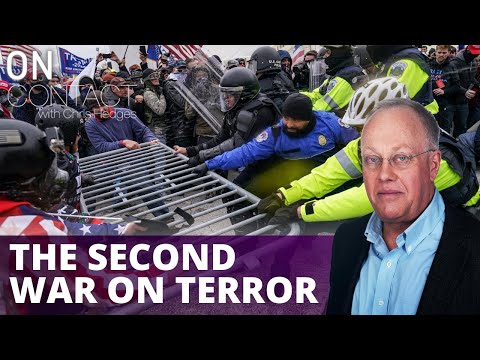 On the show, Chris Hedges discusses the second war on terror with the journalist, Glenn Greenwald.

The liberal and Democratic Party elites have seized on the January 6 mob assault on the U.S. Capital as the domestic equivalent of the attacks of 9/11. Joe Biden calls the storming of the Capital “the worst attack on our democracy since the Civil War.” Rep. Liz Cheney, a right-wing Republican whose animus towards Donald Trump has seen her join forces with the Democratic Party leadership, said that the forces behind January 6 represent “a threat America has never seen before.” The enabling resolution that created the Select Committee that is investigating the events of January 6 calls the mob assault as “one of the darkest days of our democracy.”

The hyperventilating about the incursion into the capital, often described by its critics as an attempted insurrection and coup, has effectively shut down questions about whether proposed responses for dealing with the January 6 mob incursion into the U.S. Capital. There is a collective chant by the Democratic Party leadership and many in the media for the censoring and criminalizing of those that embrace the right-wing ideology and its conspiracy theories. The Biden administration is pushing a bill authored by Rep. Adam Schiff, a member of the Select Committee on January 6, to open a second war on terror against domestic enemies. The rhetoric, and the rush to push through legislation that will severely circumscribe our ability to dissent, echoes what we heard in the immediate aftermath of the attacks of 9/11.

Those, such as Glenn Greenwald, who warn that such overreach is excessive, unconstitutional, and dangerously weakens of our already anemic civil liberties are excoriated as closet sympathizers with the right-wing. Greenwald, a Pulitzer Prize winning reporter, who is also an attorney, was one of the first and most important voices to decry the draconian provisions instituted under the Patriot Act and the anti-terrorism laws passed in the wake of 9/11. He sees a similar lack of proportionality or legality in the government actions being carried out after the January incursion with, perhaps, even more dire consequences.

Check out our other shows!

NO show does it like this. It’s TIME for The News on RT America: https://bit.ly/NRSSHOW

It’s her take on all things political and she presents ALL the angles: News.Views.Hughes with Scottie Nell Hughes, NVH: https://bit.ly/NVHSHOW

What’s your NEWS IQ? Give us 30 minutes, and we’ll take you across the globe! In Question with Manila Chan, IQ: https://bit.ly/IQ_SHOW

Steve Malzberg sinks his teeth into the slander, hypocrisy, bias and lies of MSM. MMM…Delicious! Eat The Press: http://bit.ly/EatThePress

Candid conversations with the most outspoken guy in Hollywood! Dennis Miller + One!
Dennis Miller Plus One: http://bit.ly/DennisMillerPlusOne

Let our TV time-machine bring you the week’s highlights and a closer look at the BIGGEST stories, Just Press Play: http://bit.ly/JustPressPlayShow

Author and social critic Chris Hedges conducts fascinating in-depth interviews with the fiercest critics of the establishment. Watch all episodes at https://bit.ly/2QIkQZg

Yep, it’s Gov. Jesse Ventura and you’re living in his WORLD! Come along for the ride.
The World According To Jesse: http://bit.ly/WATJSHOW

They’re watching you. Are you watching them? Are you WATCHING THE HAWKS?
Watching The Hawks: http://bit.ly/WTHSHOW

Follow the twists and turns of the global economy with Boom Bust, the one business show you can’t afford to miss. Boom Bust: http://bit.ly/BoomBustShow

Do you keep missing the forest for the trees? Let Holland Cooke show you the Big Picture, The Big Picture: http://bit.ly/TheBigPictureShow